Six plaintiffs’ lawyers have started the Atlanta Trial Lawyer’s Society, an invitation-only group for seasoned courtroom combatants. Although it sounds like an exclusive old boy’s club, it’s not. Rather, it’s an exclusive old girls’ club the city’s first for women trial lawyers.

“It will be the most female testosterone to gather in one restaurant in Buckhead,” said Linley Jones, one of the founders, adding that members will meet monthly.

Stephanie Wright of Perrell & Wright; and Jones of Jones & Bell.There are only a handful of established women trial t lawyers in the city, Jones said.

Jones said the new society’s members also belong to GTLA and strongly support its goals, but that “we are greatly outnumbered in GTLA.”

The GTLA has 230 women in its membership of 1,900, according to a spokeswoman. The 13-member GTLA executive committee has one woman, accordning to the organization’s website.

The six women decided that they needed a club of their own, where they could share recent verdicts and hash over issues of concern to their practices. 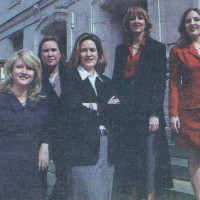 “An embattled general once told his troops: ‘Men, look as numerous as possible,'” said Wallace. “That’s what we’re trying to do,” she said, by highlighting the established female plaintiffs’ lawyers in Atlanta.

Just last week, Wallace secured a $750,000 settlement in a products liability suit where her client was dragged through the carpet-roller machine of a rug factory.

Although the group hopes to show other women that it’s possible to succeed in the male-dominated world of trial law, mentoring is not its main focus.

“Right now we’re focusing on an old girls’ network, much like the men have had for many years,” said Jones, who’s been in practice for 13 years. The members’ practices encompass product liability, legal malpractice, commercial litigation and general per-sonal injury.

Jones, who specializes in spinal cord and brain injuries, said she never considered another area of law. “I don’t think fa trial lawyer] is something you become. It’s some-thing you’re born doing. When I start-ed practicing, it was clear to me that helping individuals was what I was interested in doing and that I belonged in a courtroom.”

Women bring their own strengths to plaintiffs’ law, such as compassion for clients and the ability to commu-nicate well with juries, but it’s hard for women to get a foothold in the field, Jones said. “All it takes is going to trial lawyer functions a few times and being the only woman in the room to make some women question their choice.”

Jones said she’d like to see women make up at least half of the trial lawyers in the state in the next 10 years.

“It would make a big difference in how the public views trial lawyers,” she said. Women trial lawyers can bring “a different image to the table,” she explained, to combat the stereotype of trial lawyers as hard-charging ambulance chasers. “With the recent passage of tort reform, it’s become plainer than ever that the public has a negative image of personal injury and trial lawyers. We as women can change that image,” she said.