Featured News
When Should a Lawyer Report a Mistake to a Legal Malpractice Insurer?
Share 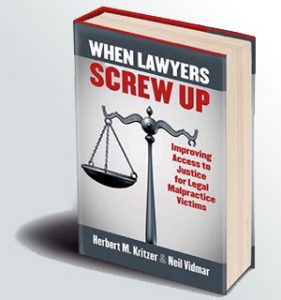 If you make a mistake while practicing law that results in harm to a client’s case, it is important that you promptly report the incident to your carrier.  Professional liability policies usually require that claims and potential claims be reported “as soon as practicable.”  Potential claims include “any circumstances that may reasonably be expected to give rise to a claim being made against an insured.”  The notice is required to be written.  A phone call to your insurance agent will not suffice.
Failure to timely report a mistake may cause your carrier to deny coverage.  It is also important to report any mistakes on your firm’s professional liability insurance renewal application each year.  Failure to meet either of these reporting requirements is a common basis for denial of coverage. In fact, it is so commonplace nowadays that professional liability insurers often send “reservation of rights” letters as a matter of routine.  These letters inform the insured lawyer that the insurer is defending the claim but not admitting coverage.  The next step, should the insurer choose to pursue it, is to file a declaratory judgment action against the insured lawyer seeking to avoid coverage.  There has been a notable increase in such cases in recent years.
If a mistake has been made and if it will result in negative consequences for the client, it should be reported to the insurer but it is not always necessary to report it as a “claim.” A claim is narrowly defined as “a demand received by an insured lawyer for money or services….”  If you have not received notice of an actual claim then, in most instances, it is sufficient to report an “incident” that could give rise to a claim.  Such a report will put the carrier on notice as required.  There is not generally a separate form for reporting an “incident”, so you may need to use the claim reporting form and replace the word “claim” with “incident”.  Either way, the report of a claim or incident that does not result in any claims expense will generally not affect your insurability or your premium rates.
My advice:  don’t risk losing your insurance coverage!  Err on the side of caution and make sure you’re protected by reporting incidents.