Sitting behind a big desk in her Buckhead office, Linley Jones looks small. Then she starts to talk. Then she fills the room. She’s not given to big gestures. She  thinks carefully before answering questions.

And even though many answers are punctuated by laughter, there’s an intensity to what she says. Rush Smith, a malpractice defense attorney at Hall Booth Smith who has lined up against Jones, describes her as “relentless” and “not easily put off.”

Jones wanted to be a journalist—the old-fashioned, muckraking kind. But after interning at Atlanta magazine she couldn’t find a job. So she applied to law school at Georgia State University “as a sort of fallback position: ‘Well, it wouldn’t hurt to have a law degree,”‘ she says. “And things just took hold from there.” President of the Georgia Trial Lawyers Association, Jones says there are a lot of similarities between her original dream job and her current one as a plaintiff’s attorney focusing on legal malpractice. “It was that getting-to-the-truth piece that I really loved. And I feel very much in the field of legal malpractice that I do the same thing. I just don’t get to write about it. The resolutions are almost always confidential. But I do get to the bottom of it, and more importantly I help my clients get to the bottom of it.” She adds, “There’s no better example of the little guy than someone who wants to sue a lawyer. They can’t even find anyone to represent them half the time.” 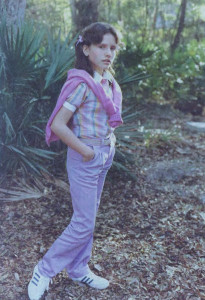 Jones reportedly studied Socrates while at the beach as a teenager

Most Georgians think of St. Simons Island as a resort area, but if you grow up there, as Jones did, it can be different story. “Growing up in the ’70s in South Georgia was a very transitional era,” she says. “I remember my school bus being integrated, for example. Things and experiences that you usually associate with people who grew up in the ’50s or ’60s, I experienced them in the ’70s. It made a big impression on me.”

She didn’t exactly fit in. Randolph Mayer, an Atlanta attorney and mediator at Mayer & Harper who’s worked frequently with Jones, has heard that she was spotted more than once on the beach as teenager studying Socrates. “If she’s a nerd, she’s a charismatic nerd,” says Mayer.

So she didn’t. At 16, Jones persuaded her father to drive the 51/2 hours to Atlanta because she found out that a private school like Emory University could admit a student who hadn’t finished high school. She was determined to go to the admissions department and ask them to take her.

Even though she hadn’t finished high school, and had only taken an unofficial SAT exam that very afternoon, Emory University accepted her at age 16.

“My dad drives me up,” she remembers, “he drops me off at the admissions department, [where] I met a woman I will never forget. I told her that I was suffocating on St. Simons Island, that I wasn’t going to learn anything during my senior year, that my brain would atrophy if I had to go to my high school another year, and please let me in Emory! And she said, ‘Well, what’s your SAT score?'”

Problem: Jones didn’t have one. Maybe it was luck, maybe determination, but she found a way—that very afternoon—to take an unofficial SAT at the campus testing center. “They scored it, then I went back to the admissions department, and she said they’d let me come,” Jones says.

Despite being one of the youngest people in her classes, Jones thrived at Emory. “It was an environment where it was OK to be smart, it was OK to want to learn,” she says. But that didn’t help with one 8:30 taught by author Robert Coram.

“Let’s just say I missed it, and I missed it more than once,” she says. “It was totally unheard of for me not to do well in a class. But my God, 8:30 a.m. You might as well have said 3:30 a.m. at that point in my life. So he called me in and said, ‘Look, I’m not going to pass you. You’re turning in assignments, but you’re not showing up.’ And I said, ‘What do I have to do?’ He said, ‘You have to write a piece that you get published in [the student newspaper] The Emory Wheel, and it has to blow me away.”‘ 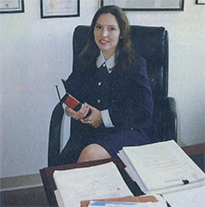 At her first law office. Once, before closing arguments, she asked an early mentor if he was nervous. “Hell yeah, I’m nervous!” he replied. “Why would I do this if I didn’t get nervous?”

So Jones wrote a two-part series on racial disparity in the Greek fraternity and sorority system that, she says, “exposed the inequalities and injustices of the system,” and got an A in Coram’s class. He’s been a mentor ever since, writing her a letter of recommendation when she was applying to law schools. “In a letter which I had kind of hoped would be highbrow, he wrote that I had the keenest bullshit detector he’d ever seen. Thanks for that, Robert!” she says, laughing.

She wanted to go into criminal law, but, again, no jobs after law school, so she turned to commercial litigation. She lasted barely two years. That job was one “most of my classmates would have killed for,” Jones says. But those weren’t the clients she was interested in. Instead, she took a massive pay cut to work for a personal injury lawyer. “Just to learn how to do it,” she says. “Because those were the kinds of clients I wanted to help, and those were the kinds of clients I could bring in…. It’s so cliched but it’s so very true: I like the underdog.”

In terms of plaintiff’s cases, she jokes she was the opposite of Mikey from the old Life cereal commercials: she would try anything. Legal malpractice cases kept coming to her, too, and she worked with Taylor Jones (no relation), the “godfather in the field,” she says. Once, the Joneses were trying a complex case that involved both legal and medical malpractice in a prison setting. They had a few minutes to draft a closing argument, and, she says, “I turned to Taylor and said, ‘I just get so nervous about these things. Are you nervous?’ Because he looked so calm. But he said, ‘Hell yeah, I’m nervous! Why would I do this if I didn’t get nervous?”

That’s when she realized that legal malpractice brought its own adrenaline rush. “The standards are very, very high. If you’re going to bring a claim against a lawyer, you darn well better cross your t’s and dot your i’s,” Jones says. “I guess that’s why I don’t have much taste for adrenaline rushes outside the office. You will not find me climbing a mountain or racing cars or any of the things some trial lawyers do. I get quite enough.”

Although she says her contingency fee is the same for all her clients, and she doesn’t negotiate, she recalls a case involving a judgment against a teacher due to a lawyers negligence. “It would not be large compared to the damages in most of my cases, but it was very large given her teacher’s salary,” Jones says. She took the case, and was surprised when it was defended for several years. Finally, the case went to mediation. ‘They offered us exactly the amount of the judgment,” Jones says, “which, very obviously, meant after two years of work, I wasn’t going to make a dime. As I recall, they wouldn’t even kick in for half the mediator. I remember thinking, The rubber just hit the road. If I could help somebody, would I still do it if it hurt me?”

The answer was yes. They settled the case and the teacher paid off the judgment.

Although a couple of times a year she takes on a smaller case, or a pro bono case, she adds, “You really do have to have a case with an approximate minimum value of $100,000 to justify what we put into it. Legal malpractice is expensive, it’s risky, it’s time-consuming and it’s complicated. So the bar is pretty high for the cases we take.” A strong Legal malpractice case, according to Jones, has clear Liability that caused financial harm. “I’m not interested in suing Lawyers over possible malpractice,” she says.

The first woman in the U.S. to be board-certified in Legal malpractice by the American Board of Professional Liability Attorneys, Jones estimates she takes one or two out of 100 clients who approach her. “So many people will call me because they are dissatisfied with their Lawyer, especially people who have just come through divorce.

They may have gotten bad representation, or they may just have had a bad outcome, but they haven’t had Legal malpractice.”

Defense attorney Smith says he trusts her. “She sizes the facts up very well,” he says. “I think every time I’ve dealt with her, she’s demonstrated a good understanding of the case’s value.” Yes, she’s intense, he says, but also pleasant, “which is sometimes a refreshing change.”

Jones may be firmly on the side of the underdog, but she believes she’s offering a service to the defense as well. “There have been times where I looked at a case involving someone I knew, and thought, ‘Can I best serve the client without having torn allegiances?’ And if the answer is yes, my next thought is, ‘Would [the defendant] actually benefit from the fact that someone competent and professional represented the claimant against them?’ So that helps me feel less awkward…. It’s just about justice for my client.”

Mayer, who estimates he has mediated 10 to 12 cases forJones, notes her “unique combination of tenacity and brains” and says she “gives ground grudgingly but shrewdly.”

Because Jones is so committed and passionate, it’s surprising to hear her say that legal malpractice isn’t really something she wants to do. “I see it as something that needs to be done that I can do, and that I will do,” she says. “If it were up to me, I’d rather lawyers didn’t commit malpractice anymore and I would shutter my practice and practice adoption law or something fun. But the reality is, I don’t expect that will happen any time soon. Unfortunately, lawyers do commit malpractice. Business is good.”

Jones is hoping that her election as 59th president of the Georgia Trial Lawyers Association heralds a change.

“I hope it means there is a greater acceptance of the fact that we should all be held to the same standards,” she says. “I cannot for the life of me understand the hypocrisy in the lawyers who find the field of legal malpractice offensive. I don’t understand the thinking of the thin blue line that we’re somehow a band of brothers who inflict justice and don’t impose it upon ourselves.”

“You know that bumper sticker that says, ‘You can have my gun when you pry it out of my cold dead hands’? It doesn’t sound the same when you substitute ‘subpoena.’ But we should feel the same way about it. It’s the basis for our entire system.”