Two figurines of dogs sit at the corner of Linley Jones’ desk in her high-rise office at the center of Buckhead. One is a boxer, her favorite type of dog. The other – despite acquiring her legal education at Georgia State University – is a bulldog. It has nothing to do with the University of Georgia mascot.

“Bulldog is the nickname I’ve gotten from some fellow lawyers,” she says, smiling. “But it’s a misconception that you have to be aggressive. After 20 years, I found you have to be well-researched and persistent and dogged in your determination to pursue your cause.”

For Jones, that cause is to find justice for her clients. Jones is the first female lawyer in the United States to be board-certified in legal malpractice by the American Board of Professional Liability Attorneys. In addition to specializing in legal malpractice, Jones represents clients in personal injury and wrongful death cases. 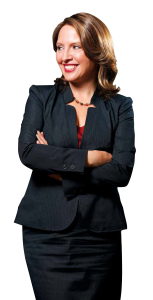 A native of St. Simons Island, Ga., Jones credits her Southern upbringing for her quest for justice. She points to her growing up observing, reading and learning about justices and injustices in the Deep South; about great Southern authors like Richard Wright, Carson McCullers and Eudora Welty. “They wrote sometimes directly and sometimes obliquely about the disparities in society and how justice is meted out. I think that impacted my mission from a very young age.”

Indeed, she moved to Washington, D.C. during high school to work as a Senate page for the U.S. Senate Judiciary Committee and then returned to Georgia where she studied African-American literature at Albany State College before starting her undergraduate studies at age 16 at Emory University; where she was named a Kemper Scholar and received her B.A. in political science. “I was very interested in politics and investigative reporting and in law, which in retrospect, are all pursuits in our society where things are set right.”

She interned at Atlanta Magazine, but when she couldn’t get a job in journalism, she decided to go to law school at Georgia State where she was named a Fuller Callaway Scholar. “I’m just a big nerd:” she laughs. “I loved higher education. I still listen to legal education lectures on CD” After law school she knew she wanted to do something that would help people find the justice they deserve. “I didn’t want to work at a big law firm and I didn’t want to go into corporate law.”

Her first cases were personal injury. “I was getting the bottom of the barrel referrals from all sorts of lawyers, and by the time the cases came to me, they had sometimes already been botched by other lawyers,” she recalls. One case in particular showed her that she needed to learn how to represent those people who had gotten bad representation. The client had filed for bankruptcy. His lawyer told him that he could stop payment on checks he’d already written for goods he’d received. That was incorrect. The man was publicly arrested at his place of work, he lost his job and his lawyer didn’t stick around to help.

After getting some advice from Taylor Jones (no relation), probably the first and best-known legal malpractice attorney in Georgia, Linley Jones tried the case in DeKalb County. “It was settled while the jury was out.” Linley Jones later compiled a book about Taylor Jones upon his retirement.

Since that time, Jones has handled legal malpractice matters involving all types of underlying cases—business transactions, real estate, personal injury, etc., on behalf of individuals as well as corporations and businesses.

Jones points out that it is a difficult path for clients whose trusted lawyer suddenly becomes their opposing party, but “they have the same right to compensation for negligence as any other litigant.” Jones loves what she does. “I get to litigate against some of the finest lawyers out there,” she says, referring to attorneys who represent malpractice insurance companies. “It is always an intellectual challenge.”

But, unfortunately, many attorneys in Georgia do not have legal malpractice insurance. “I get calls on a weekly basis from people who have been victims of legal malpractice and lost a lot of money and they have no significant recourse because the lawyers are not insured. I believe Georgia law should require lawyers to be insured, just like drivers.” She acknowledges that Georgia isn’t unusual in this regard, and that most law firms do have insurance. The problem is, when hiring an attorney, clients don’t know to ask whether he or she has insurance. Most clients assume lawyers are required to have insurance.

“Legal malpractice is a nightmare for a client. It’s a lengthy process and it’s expensive,” Jones points out. Legal malpractice is also a very narrow field. Many attorneys don’t want to sue their colleagues, afraid they’d be alienated by the legal community and their peers. “I’m sure there are lawyers who aren’t big fans of mine, but if justice is done, that’s all right,” she acknowledges, noting that she gets most of her cases from referrals from other attorneys. “My goal isn’t to see a lawyer punished. It’s never my intent to embarrass or damage their careers. I just want to get justice for my client. And I think a lot of lawyers appreciate that we’ll take these cases.”

The whole field of legal malpractice has developed just in recent decades, she says. “That’s probably what drove me to it. It seemed to me a real need, to seek justice for those who needed to sue lawyers. Typically these are former clients in civil actions. They sue to recover for losses due to their lawyers’ negligence or misconduct,” she explains. 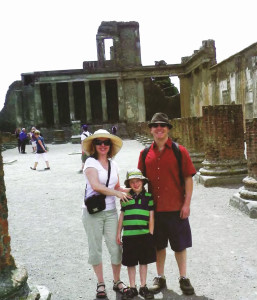 Jones and her family visit the “first courthouse the basilica in Pompeii.”

What she loves most about her work are the people she represents. “I’m in the fortunate position to get to select my clients. I choose to work for people and causes that I find inspirational. The people I represent come from all walks of life and they tend to be very brave, persistent folks. They are not willing to let it go when they’ve been victimized. In a fair number of my clients, their lawyers may have been the only lawyers they’ve ever known. So it’s not only a loss because of what the lawyer did, but there’s also a tendency to be brokenhearted. There’s a loss of trust and sense of betrayal, even when my client is a corporation.”

Speaking of her clients, she paraphrased a quote from the classic book by Harper Lee, “To Kill A Mockingbird”: Courage is not a man with a gun in his hand, but the person who fights for what is right. “I have the rare privilege to represent many inspirational people,” she explains. “And in my personal injury and wrongful death cases, it’s an honor to represent people at the times of their greatest losses. I get to see up-close an individual’s human spirit.”

Apparently, Jones represents them well. She has yet to lose a malpractice trial, although the vast majority of her cases don’t go to trial. Her settlements, usually confidential, can be in the eight figures.

Jones is also eager to make her clients comfortable and at ease. She personally worked with the interior designer of her offices and her officemate attorney Lloyd Hoffspiegel, to ensure that the atmosphere wasn’t intimidating. She used soft, muted colors and there’s a couch in her office giving the feel of a living room. “My clients have just been through harrowing experiences. They are looking for a lawyer they can trust and feel comfortable with,” she explains.

Other attorneys are obviously comfortable with her as well. She says she is honored to be the president-elect of the Georgia Trial Lawyers Association, especially at “a critical time for civil justice in Georgia. The constitutional right to a jury trial is at risk. The system of civil dispute resolution created by our Founding Fathers is now a political target.”

A music fan whose husband owns a music education business, Jones is also an active member of the American Association for Justice, the Atlanta Bar Association, and the Lawyers Club of Atlanta and is a co-founder of the Atlanta Trial Lawyers Society. She has repeatedly been named Super Lawyer by Atlanta Magazine and one of the Top 50 Women Lawyers in Georgia.

Mentoring other women attorneys is important for Jones. “Women don’t go into trial work as much as men.” she states, blaming, in part, the very language of trial work. She gave examples of “going to war” and other military, “very male” terms.” It’s an inaccurate description. I think litigation is the opposite of war; it’s the orderly and peaceful resolution of disputes.” she says. Her seven-year-old son has only known life with a trial lawyer Mom, once asking her, “Mom, can men be lawyers too?”

While some professionals – especially women, perhaps – worry about work/life balance, Jones doesn’t believe in the concept. “Being a trial lawyer means you can’t take that hat off at night. You are constantly thinking about how to help your clients. I’m emotionally involved in all my cases. That’s just a part of who I am.”

Being a trial lawyer doesn’t prevent her from her favorite hobby of family travel. She and her family recently returned from an excursion through Italy, including a visit to the “first courthouse”—the basilica at Pompeii.