News & Events
Estate of Famed Lawyer Charles Mathis Sued
Share
ENTERTAINMENT AND PLAINTIFFS LAWYER Mathis left no will, and a receiver is resolving his cases; assets are unclear amid $165,000 lawsuit

A former client has sued the estate of entertainment and plaintiffs attorney Charles Mathis Jr. for $165,000.

The complaint filed June 1 by Atlanta  solo Linley Jones said that Mathis, who died last year at 57, had been wrangling over $115,000 from a settled case with the  former client, Thomas Parham, for several years. Despite the disagreement, Parham gave Mathis another $50,000 to invest in a business venture, the complaint said.

“It is very unfortunate that it came to this,” said Jones, nothing that Mathis had cancelled his malpractice insurance prior to his death. According to a cancellation letter from carrier, Iron horse Specialty Insurance Co., the cancellation was effective March 12, 2011, less than two months before he died.

“We’ve made every effort short of this to avoid having to file this lawsuit,” Jones said. “I’m not at liberty to go onto detail about Mr. Parham’s efforts prior to retaining me, or my own actions on his behalf.”

Last July, the Georgia Supreme Court appointed Atlanta solo Herald Alexander as the receiver of Mathis’ case files so that Alexander could contact Mathis’ clients and wrap up the details of the deceased lawyer’s practice.

Alexander said he had been approached by Mathis’ family members to assume that role, and he wanted to be sure the suit didn’t cast his longtime friend in an unfavorable light.

“I loved Charles, and I wanted to assist as much as I possibly could,” said Alexander. He rejected any suggestion that Mathis had mishandled a client’s affairs.

“To the extent that [any allegations in the suit] may be unfair to Charles, I certainly don’t want anything to besmirch his memory,” Alexander said.

Jones said Alexander had been cooperative as she works to recover Parham’s funds, 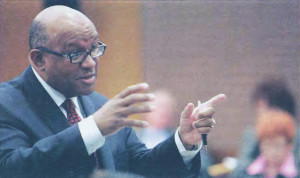 “But at this point, we just felt like we needed to be aggressive about pursuing Mr. Par-ham’s claims.”

According to records on file with the Fulton County Probate Court, Mathis was survived by his wife, Cynthia Mathis, two daughters and a son. In November, Russell & Herrera partner Ann Herrera was appointed administrator of Mathis’ estate. She didn’t respond to requests for comment.

According to Parham’s complaint, filed in Fulton County State Court, Mathis represented him in an unspecified and confidential legal matter that resulted in the lawyer receiving $1,115,000 in September of 2008. Of that, Mathis paid Parham $408,556, and promised to give him an additional $115,000 “approximately one month later.”

“Despite repeated demands,” the complaint said, the money remained unpaid when Mathis died, “nor has his Estate disbursed these funds since that time.”

“In the three and a half years since then,” it said, “Mr. Parham has not received any information on where, how, or if the $50,000 was invested on his behalf.”

The suit alleges legal malpractice, breach of fiduciary duty, fraud, conversion and trover, and seeks a total of $165,000 in damages, plus fees and expenses.

A high-flying figure in life, Mathis maintained professional and social relationships with some of the Atlanta’s biggest names in sports and entertainment: His Buckhead mansion was the scene of glittering parties where stars like Usher and Jermaine Dupri might be found rubbing elbows with Atlanta Mayor Kasim Reed or Herman Russell, according to local news accounts and entertainment websites.

But in early 2011, the bank that financed the purchase of the mansion, Eastern Savings Bank, launched foreclosure proceedings and sold the home March 1 of that year for $2.3 million, according to county records. When he died April 29, 2011, Mathis was suing the bank, claiming it had failed to properly record his escrow payments; the case was later dismissed.

Filings in that case indicate that after Mathis’ death, his attorney, Alexander, told the bank’s counsel that his client had died without leaving a will and that his heirs “did not intend to administer plaintiff’s estate.”

Jones said she is unaware of the extent of that estate but noted that Mathis had clients and cases when he died and expects there will be assets available to settle her client’s claim.

“Charles was a very active lawyer, and he definitely had a full caseload,” Alexander said. “There is a lot involved in sorting through everything and bringing matters to a close. Every case is unique; it’s not a simple task.”

Alexander said he did not know how or whether he would be recompensed for his efforts; “I haven’t been paid and don’t know that I will be,” he said. “I entered into this because my friend had died. I was told the situation was deteriorating and they needed someone to help with his affairs.”